I had been looking forward to seeing Desperate Men – Slapstick & Slaughter by Richard Headon and Jon Beedell. The day before the show I had a short chat with Richard Headon and it all sounded really great: desperate men, slapstick and Slaughter performed in genuine dada-style by themselves. I arrived at the show in a churchyard in Greenwich. A bit faraway from the rest of the festival. It was a wet day the other festival performances were late and we were waiting for the performance to begin. The atmosphere was casual and relaxed. Programmes were handed out and the audience was well and comfortable seated on tarpaulins on the grass. It was a bit cold. The one blanket they had for the audience in case of cold wheather was wrapped around a lucky child. The rest of us would have to suffer but it was only a 35 minutes performance so what the heck…

Jokes were told from the slippery grassy-greasy stage. Especially John Bedell was in a great  and very comforting overexited mood. It was cold and allready dripping but we were in good company and we were having fun.

They started. Jon Beedell sitting on a tombstone doing some incredible uninterpretable moves, Richard Headon hiding behind a tree. You couldn’t really see him but a branch was moving up and down so fast that it must have been driven by a heavy and unpredictable force. No descression here. Just pure testosterone builded up by two  male actors  who – everyone could tell (even the crying child) – had been arround on Britton’s stages for quite a while doing all kinds of stuff. They entered the stage. Both guys performed with great artistic authority it was kind of dadastyle legacy theatre and personal stories  and I really loved it. The show had been going on for not more than five minutes when it started to rain heavily. For the two actors it was evident to everyone that it was impossible for them to go on…and then on the other hand they couldn’t stop. It was now raining form a really black sky and half of the audience had allready left. The rest of us was talking to the two performers when something really strange and very rare happened.

One of my favorite books is “The Dream Book” by Swedish mystican Emanuel Swedenborg. The book starts out as a diary where he registers number of miles he walks, the dates and the city he visits. Nothing more. Then suddently after a while there is a 3-week intermissioon where nothing is written down and then he sets off again. But now he writes down visions and dreams and meetings with angels and much more. 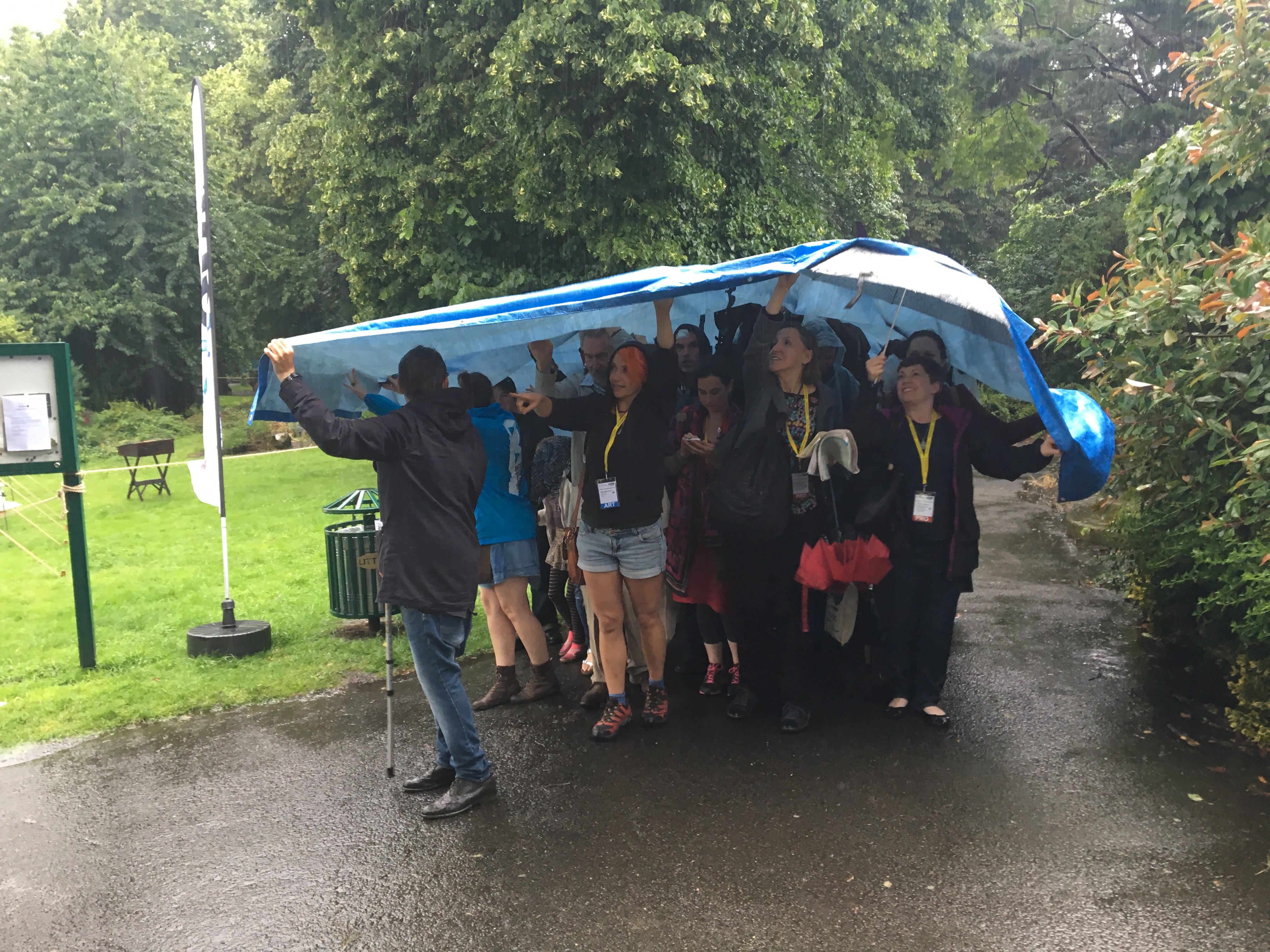 And this was basicly also what happened here. I don’t really know how it happened but suddently and without notice the floor became the roof. We stood there with our hands in the air, holding the tarpaulin, like at a rave party. The actors started to improvise and we all started singing “Leaving on a Jet plane” “Its a long way to Tiparary” and many more from the good old days of World War I, 1968 and stuff. What’s next? Someone suggested we go to Buckingham Palace and demand her Majesty to keep her kingdom together. We could also stay or move to the nearest pub. A compromise was made and the collective mind and its legs decided to head for the farest pub at Cutty Sark on the bank of The Thames. Fighting streaming waters, storm and passersbys – off we went.The collective had also noticed that one of its parts was a very old man who could not walk so fast. But the collective body and mind complied, very, very slowly we walked. All European nationalities with no real direction other than looking for a pub far away. A beautiful creature, maybe a reptile of some sort, fifty legs, 25 minds with no sense of direction but full of love, and a more-than-human sense that European diversity is beautiful and that we will stay together and welcome the rest of the world under the tarpaulin forever.

Thank you for the show, guys. May the four winds blow you safely home.