Tatiana-Mosio Bongonga is the tight rope artist of the Cie Basinga and the day after she tells about her work to 30 young artists from Europe and her work. “The community is a crucial part of my work…and the fattest guy in the world can have as good a balance as anyone else. It is all about balance…We don´t work with a specific ideal for the body”, she tells the young artists. She is going to walk the longest and highest tightrope in her career. Also, she mentioned an episode from the preparations in Alés: “A man living in one of the high buildings told med he was so happy about the project because his image associated with the building was of a woman who jumped from the building and comitted suicide”.

“The tightrope walk itself is just an excuse or the final point of a long proces involving several artistic disciplines, philosophy and the local communitiy. This has been a very long proces, the proces can be shorter but the proces is always there and a very important part of the performance”.

The next day is the day of the walk and it is filled with tension and excitement. This year is also the 20th anniversary of Cratére Surfaces, the theatre festival in Ales and one of the few festivals organised by an inddoor theatre in France. I have visited the festival many times.

On the performance day the wind is strong. Too strong for the walk, many think. Even Tatiani-Mosio has her concerns. When she a few hours later shows up in the catering restaurant of the festival everyone spontaneously applauds. She smiles, sends her thanks but in balance and as cool as ever. Before the walk there is an opening reception with the mayor and board members of the theater. The table cloths are constantly caught by the wind blowing them off. The official talks begins. The Artistic Director of Cratére surfaces, Denis Lafurie, is first. After him follows the officials. And Cratére Surfaces 2018 is on.

The first performance I see after the opening of Cie Basinga is Cie Sous X “Terre Commune”. The Director and Performer Alix Denambride studied and documented the life of homeless people in Marseille and France using this documentation as part of the performance. Basinga being a vertical show, this is indeed the opposite, a horizontal performance, where the ground and the site plays a crucial role in the artistic concept. Is it a terrain vague? A site that is waiting for investors? Well, not really. It is an abandoned piece of land, remnants from some industrial activities. Concrete spots overgrown by grass is everywhere and the city profile or skyline is seen from the site.  It is a place where you would expect to meet a homeless person.

The dramaturgy: audience waits, are let in and walks 100 meter on the ground and are seated at the performance ground. The walk is important, you experience the site. Then you sit and watch a homeless woman raise from the grave, video statements on the site, projections on a commercial sign covered with plastic – urban street aesthetics. The woman is dead, noone can hear her (only the audience). She was in a way also dead in real life (although she had a love – but only as a memory). Only the moment after her death she is purified. On the steal table she is washed and her hair is done and she turns into a beautiful woman. She is dressed up and sings her song….It is raising the discussion of existentialism and ruined lives in the post-capitalist society. References to Jean-Paul Sartre “Huis clos”. It is a both very strong and a very intelligent piece.

The festival certainly had many other highlights. Cie Carabosse’s beautiful fire installation at the Garonne, Cie XY’s exploration of the town via circus, Cie Woest “Lucky Shots” which I have seen many times before and enjoy so much, Gandini Juggling “8 Songs” and many more (sorry for not mentioning). I met a Dutch heavy metal rock and roll band Highwell to Hell that played many good versions of favorite rock´n roll classic. I lost a little bit of the rock´n roll feeling when one the band members passed me and smelled of sun lotion factor 50.

UPDATE: FESTIVALS
The festival had a focus on Dutch street theatre with interesting discussions with arts council representatives from Holland. Talks about business models for festivals. Festivals in cities needs an economy in the rural areas they also tap into all kinds of contexts. See a later post. 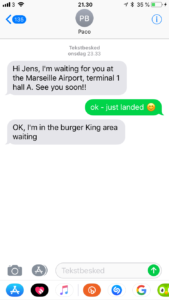 On the 9th day of Christmas, #SOFestival gave to me